Women have effectively worked for free so far this year because of the gender pay gap, campaigners have said.

Today has been dubbed “Women’s Pay Day”, since an 18.4 per cent wage difference means women must wait more than two months of the calendar year before they start to earn the same as men, according to new analysis.

The Trade Union Congress (TUC) said this year’s Women’s Pay Day happened to come at the same time as International Women’s Day, which is held on 8 March every year to celebrate the achievements of females around the world.

24 inspirational women give their advice on International Women’s Day

The federation based its calculations on figures from the Office for National Statistics that found the median hourly pay of both full and part time workers.

Since 2011 the full-time pay gap has fallen by around 0.2 per cent a year, the TUC said. At this rate it will take more than 40 years to achieve equal pay between men and women.

The findings come after the European Commission’s statistical agency revealed the UK had the fourth highest pay gap in the EU in 2016, behind Estonia, the Czech Republic and Germany.

Last year, the UK Government decided companies with more than 250 employees must report their gender pay cap. The deadline for reporting, which affects around 9,000 companies, is on 4 April.

The TUC, which is made up of 49 unions and has 5.5 million members, is calling on the Government to make all employers carry out equal pay audits and to produce action plans to close the pay gap in their workplace. Companies that fail to do so should be fined, the federation said.

TUC general secretary Frances O’Grady said: “Nearly 50 years since the Ford machinists went on strike at Dagenham, the UK still has one of the worst gender pay gaps in Europe. Women effectively work for free for two months a year.

“Companies publishing information on their gender pay gaps is a small step in the right direction but it’s nowhere near enough. Women in the UK will only start to get paid properly when we have better paid part-time and flexible jobs. And higher wages in key sectors like social care.”

In some industries, women must wait until April or even May before they start to be paid at the same rate as men in their industry, according to the TUC.

The longest wait for Women’s Pay Day is in the finance and insurance industry, where a 35.6 per cent pay gap between men and women is the equivalent of 130 days – more than a third of the year.

Female dominated professions were also among those with the largest pay differences between men and women. Women working in education were on average paid 26.5 per cent a year less than their male colleagues, the analysis found, while the gender pay gap was also above average for health and social workers – women in these professions were paid 18.8 per cent less.

Liz Shafer, a drama and theatre studies professor who took legal action and reached a settlement with Royal Holloway, University of London, over unequal pay in 2011 told The Independent she “hoped things would have changed more” since then.

“It was only by going to the employment tribunal that I could force my employer to concentrate on the problem. Employers need to think how demotivating it is for women to be looking at the gender pay gap.” 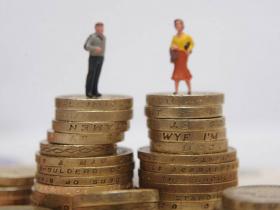 She described “going stratospheric” when she saw what her male counterparts were paid.

“That’s when I said this is a point of no return,” she said. “There was no way I was not fighting that all the way – I could not believe what I was looking at.

“I committed to an employment tribunal process,  but it’s a long process. It’s exposing and exhausting and everything goes into the public domain – everything. People knew about my childcare arrangements,  it’s not something you should take lightly.”

She said before she went to her employment tribunal she conducted research that confirmed she was worth a higher wage.

“Because I am a researcher, I went at it with gusto. I came out feeling empowered and confident – but people who are not so used to being assertive might find the employment tribunal process daunting.

“It’s just not something you want to do. It’s a last resort. You shouldn’t have to do it

International Women’s Day: Why we celebrate it

A spokesman from Royal Holloway said since Ms Schafer’s employment tribunal the institution had “pioneered a number of initiatives to address the gender pay gap”.

A statement from the college said: “Today, we have transparent pay scales and clear criteria for progression and promotion across the academic community, and our approach is working.

“We believe that Royal Holloway is playing a leading role in tackling inequality in relation to the academic progression of women.”

The TUC’s revelations about the pay gap came on the same day a survey was published that found a third of women earning below the voluntary living wage had no savings.

The Living Wage Foundation and the Fawcett Society asked 1,000 female workers about their finances and found that two out of five have more than £500 of debt, with one in four spending over £100 a month servicing their debt.

The voluntary wage is £8.75 an hour outside of London and £10.20 in the capital, compared with the Government’s national living wage of £7.50 for over 25-year-olds.

“But we won’t close it until we address all the causes of the pay gap and women won’t achieve true pay equality until we have transparency at work.

“High profile equal pay cases prove that pay discrimination still happens in our workplaces. With pay secrecy discrimination can thrive. We need to make 2018 the year that we make it OK to talk about pay.”

A Home Office spokesperson said: “This Government is clear that tackling injustices like the gender pay gap is part of building a country that works for everyone. Equality pays – estimates show that bridging the gender gap in work could add £150bn to the UK economy by 2025.

“The UK is one of the first countries to introduce gender pay gap reporting, which will shine a light on where employers need to take action and allow them to address the gaps.

“Reporting gender pay gap data is not optional; it is the law, and employers that do not comply will risk facing legal action from the Equality and Human Rights Commission.”

Any cookies that may not be particularly necessary for the website to function and is used specifically to collect user personal data via analytics, ads, other embedded contents are termed as non-necessary cookies. It is mandatory to procure user consent prior to running these cookies on your website.